The Math of Targeting

by Paul Mitchell | May 9

For years PDI has been quietly providing consultants, candidates, pollsters and research institutions with the data and targeting necessary to effectively run and analyze campaigns.  Through the years, PDI has become known for very solid targeting of likely voters using a number of variables, most notably vote history.  The PDI voter file, unlike any other public or private file in the country, combines thousands of statewide and local elections from across 58 counties.

In the past several election cycles, PDI targeted universes haven’t been close – they’ve been dead-on.  Even in local races, like the San Diego Mayoral race, where some national polling showed varying turnout based on age, ethnicity and partisanship, PDI was less that 1% off, combined, across all key measures.  This is impressive, but it isn’t the be-all, end-all.  There are actually three key measurements used to quantify the effectiveness of a turnout universe:

1)      Hits: voters in the target universe that cast a ballot where a likely voter universe helps maximize the amount of contact to people who are actually going to vote.

3)      Lost Opportunities: voters in the election that weren’t in the target.

To illustrate, below are three ways of creating universes in the 2012 Primary election cycle, with their resulting Hits, Misses and Lost Opportunities for an Assembly District in Los Angeles.

In this table above, a consultant could abruptly decide that 5 of 5 is the “best” voter universe.  However the number of voters reached in this universe is only a very small portion of the electorate – likely too small.  Yes, 80% of the voters who received their mail cast ballots, but the vast majority of voters in that election would not have even been contacted by the campaign.

Targeting mailers using these universes requires an understanding of how the targeted universe impacts the costs of the campaign.  Mail, for example, has low fixed but high marginal costs. The bulk of the cost of mailing is in the postage/printing that increases as your universe grows.  With that understanding, the most efficient mailing universe on this table would be 12P3 as it targets a population that is 56% turnout in a 22% turnout election, reaches 75% of the actual voters, and misses fewer opportunities than the most similar 3-of-4 universe.  The 12P1 universe could be used for a narrowly targeted expensive mailing while a mailing to unlikely voters could be targeted to voters who are in 12P5 but are not in 12P3.

The most efficient universe for walking, however, would be 12P5 as it reaches 85% of the voters on Election Day and has a low rate of Lost Opportunities.  Unlike a mailing, the “cost” of walking is on the front end (recruiting volunteers, printing packets, driving to the precincts) and the marginal cost of knocking on more doors is very low or nonexistent.  In fact, one of the greatest fears of a walk program is the demoralized volunteer that walks 10 blocks, knocks on 20 houses and gets no responses.  If a walker is out in a precinct, density is good and increases likelihood of contacts and a good experience.

This 12P5 universe, or even the 2 of 4 plus New Reg universe, could be useful for robocalls or emails that also have very low fixed and marginal costs.

END_OF_DOCUMENT_TOKEN_TO_BE_REPLACED 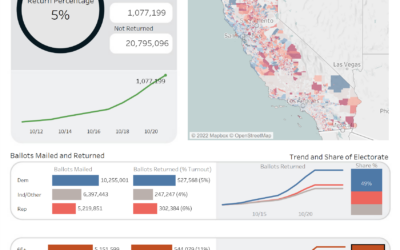